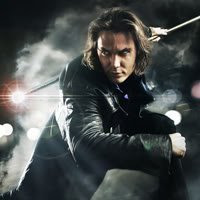 Missing from all the previous X-MEN movies, my all time favorite character the GAMBIT a.k.a Remy La Beau finally will be included in the upcoming X-MEN  ORIGINS : WOLVERINE  movie.  Now,  I have the reason to want to watch the X-MEN movie…again.

I get to watch the first one only and decided not to watch the sequels the X2 and X3. When GAMBIT not in the story I don’t feel like I want to watch it. Drop everything and watch something else instead.

And then left me wondering, how director Gavin Hood is going to portray this character, how he will be adapted into this live-action film?  and what kind of back story he’s going to get.

The role will be played by Taylor Kitsch on “Friday Night Lights” and starred in “The Covenant” as the card throwing Cajun.

In the movie preview (after the jump), you’ll get to see GAMBIT in action and shown a preview how the character will actually be presented in the movie. It got me concerned, the promotional trailer only shown action scenes but no part where GAMBIT character is actually talking.

Can the actor pulls this off and bring out GAMBIT most important character trait :  slick dialogue and awesome Cajun accent. If the actor can’t play out the role well, he’ll end up screw things up.

Well, that all will be revealed when the movie due out on 1st May 2009.

4 thoughts on “At long last..Gambit making an appearance”

Wed Jul 29 , 2009
I have completed my first wordpress theme. The rest of the design will be added later on after each theme completion. I will put in the ‘Free WP Themes ‘ category and please feel free to download. Any bug issues or problem with the theme, do not hesitate to contact […]