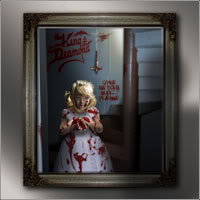 Give Me Your Soul…Please is a concept album by King Diamond released on June 26, 2007.

All King Diamond fans rejoice!. I announce that the “horror storyteller” is back! …again… King Diamond is back with a new album. Bringing his dark and epic tales to the masses.

All I can say is the album is good but not quite what I’m expected. A few things are different this time. The church organ serves as a nice little introduction just like in some of his past albums but not as spine tingling as usual. Nothing beats the legendary masterpiece “ABIGAIL”, giving me the creeps just by listening to the music and spooky storyline like lyrics.

King Diamond has always had a great voice and one of the craziest and most impressive voices in the business. I always love his insanely high pitch voice ( falsetto ) but only appeared a few times. He sings more in soft pitch voice much more than usual in this album. The guitar riffs by Andy LaRocque and Mike Wead on the album is excellent. Anyways, it’s not an overall disappointment. The album is still good coming from the black metal legend himself. It can’t topped off the quality of his past works, most of which are classics.

I bought it and it did take a few listens before the album opened up to me, but from then on it has just kept on growing. I’m beginning to like with the songs especially “Give Me Your Soul”. The kind of music your listen and it stuck inside your head for days.

I’ve embedded last.fm widget with King Diamond’s new album tracks and also extra 2 tracks from his past albums. It’s only preview audio tracks. Listen before you buy. If you’re always been a King Diamond’s fan, you would buy it anyway and add this album in your album collections.

Diamond elaborated on the themes of the album, being a story of two dead children ( brother and sister ), murdered by their father and become spirits, relating their tale to him. The boy is accused of committing suicide and is condemned to hell. The sister comes up with a plan to help him get to heaven with her.

All lyrics by King Diamond. Music credits as indicated.

Sun Oct 28 , 2007
My Firefox been lagging heavily and freezes for weeks now. After Google-ed with the right keyword and finally I found this. I post it here in case some of you can’t find it. Thanks to the expert who come up with this useful tip. Easy to do. Just follow this […]